Hold the Phone: A Primer on Remote Mobile Usability Testing

In recent years, remote usability testing of user interactions has flourished. The ability to run tests from a distance has undoubtedly broadened the horizons of many a UXer and strengthened the design of many interfaces. Even though mobile devices continue to proliferate, testing mobile interactions remotely has only recently become technologically possible. We took a closer look at several of the tools and methods currently available for remote mobile testing and put them to the test in a real world usability study. This article discusses our findings and recommendations for practitioners conducting similar tests.

Moderated remote usability testing consists of a usability evaluation where researchers and participants are located in two different geographical areas. The first remote usability evaluations of computer applications and websites were conducted in the late 1990s. These studies were almost exclusively automated and were neither moderated nor observed in real-time. Qualitative remote user testing was also conducted, but the research was asynchronous—users were prompted with pre-formulated questionnaires and researchers reviewed their responses afterward.

Remote user research has come a long way since this time. Researchers can use today’s internet to communicate with participants in a richer and more flexible way than ever before. Web conferencing software and screen sharing tools have made initiating a moderated remote test on a PC as simple as sharing a link.

Pros and Cons of Remote Testing

In deciding whether a remote usability test is right for a particular project, researchers must consider the benefits the methodology affords as well as the drawbacks. Table 1 details this comparison.

With mobile experiences increasingly dominating the UX field, it seems natural that UX researchers would want to expand their remote usability testing capabilities to mobile devices. However, many of the mobile versions of the tools commonly used in desktop remote testing (for example, GoToMeeting and WebEx) don’t support screen sharing on mobile devices. Similar tools designed specifically for mobile platforms just haven’t been available until fairly recently.

As a result, researchers have traditionally been forced to shoehorn remote functionality into their mobile test protocols. Options were limited to impromptu methods such as resizing a desktop browser to mobile dimensions, or implementing the “laptop hug” technique where users are asked to turn their laptop around and use the built-in web cam to capture their interactions with a mobile device for the researcher to observe.

Overview of the Tools

In many moderated remote testing scenarios focusing on desktop and laptop PCs, researchers can easily view a live video stream of the participant’s computer screen or conversely, the remotely located participant can control the researcher’s PC from afar. Until recently, neither scenario was possible for testing focused on mobile devices.

In the last decade, improvements in both portable processing architectures and wireless networking protocols have paved the way for consumer-grade mobile screen streaming. As a result, researchers are beginning to gain a means of conducting remote mobile user testing accompanied by the same rich visuals they’ve grown used to on PCs.

At present, moderated remote testing on mobile devices can be accomplished in a number of ways. These methods represent a variety of software and hardware configurations and are characterized by varying degrees of complexity. Figure 1 depicts four of the most common remote mobile software configurations that exist today. 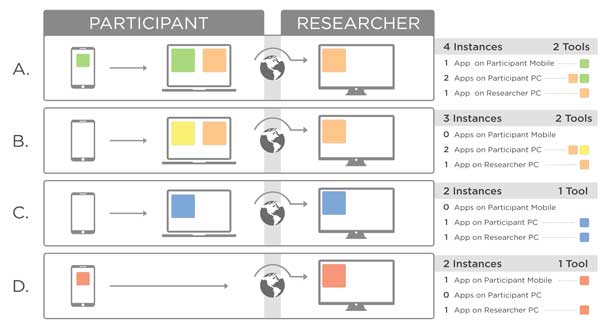 Characteristics of the ideal tool

There are many tools that claim to support features that might aid in remote mobile testing. Unfortunately, when evaluated, most of these applications either did not function as described, or functioned in a way that was not helpful for our remote testing purposes.

As we began to sift through the array of software applications available in app stores and on the web, we quickly realized that we needed to come up with a set of criteria to assess the options. The table below summarizes our take on the ideal characteristics of remote usability testing tools for mobile devices

Table 2: Descriptions of the ideal characteristics

How we evaluated the tools

Of the numerous tools we uncovered during our market survey, we identified six which represented all four of the configuration types and also embodied at least some of the aforementioned ideal characteristics. Based on in-house trial runs, we subjectively rated these six tools across five categories to more easily compare and contrast their strengths and weaknesses. The five categories that encompassed our ideal characteristics included:

The rating scale was from 1 to 10, where 1 was the least favorable and 10 was the most favorable. The spider charts below display the results of our evaluation. As the colored fill (for instance, the “web”) expands outward toward each category name, it indicates a more favorable rating for that characteristic. In other words, a tool rated 10 in all categories would have a web that fills the entire graph.

We are not affiliated with any of these tools or their developers, nor are we endorsing any of them. The summaries of each tool were accurate when this research was done in early 2016.

Mobizen and Team Viewer each had strengths in affordability and ease of use, respectively. However, Join.me and Zoom notably fared the best on the five dimensions overall.

Having done this analysis, when it came time to conduct an actual study, we had the information we needed to select the right tool.

Ultimately, we can test tools until we run out of tools to test (trust us, we have). However, we also wanted to determine how they actually work with real participants, real project requirements, and real prototypes to produce real data. We had the opportunity to run a remote mobile usability test with a federal government client to further validate our findings.

Our client was interested in testing an early prototype of their newly redesigned responsive website. As a federal government site, it was important to include a mix of participants from geographies across the U.S. The participants also had a specialized skill set, meaning recruiting would be a challenge. As a result, we proposed using these newly researched tools to remotely capture feedback and observe natural interactions on the mobile version of the prototype.

To minimize the possibility of technical difficulties during the study itself, we walked participants through the installation of the tools and demonstrated the process to them in the days prior to the session. This time allowed us to address any issues with firewalls and network permissions that are bound to come up when working with web conferencing tools.

Using this method, we successfully recruited seven participants to test the mobile version of the prototype (as well as eight participants to test the desktop version). We pre-tested the setup with three participants whom we ultimately had to transfer to the desktop testing group due to technical issues with their mobile devices. Dealing with these issues and changes during the week prior to the study ensured that the actual data collection went smoothly.

Not surprisingly, we learned a lot from this first real world usability study using these methods and tools.

The Future of Remote Testing of Mobile Devices

While we’re optimistic about the future of remote mobile usability testing, there is certainly room for improvement in the tools currently available. Many of the tools mentioned in our analysis are relatively new, and most were not developed specifically for use in user testing. As such, these technologies have a long way to go before they meet the specifications of our “ideal tool.”

To our knowledge, certain characteristics have yet to be fulfilled by any tool on the market. In particular, we have yet to find an adequate means of allowing a participant to control the researcher’s mobile device from their own mobile device, nor a tool that screen shares only a single app on the user’s phone or tablet, rather than the whole screen. Finally, and perhaps most importantly, we have yet to find a tool that works reliably with both Android and iOS, not to mention other platforms.

Nevertheless, mobile devices certainly aren’t going anywhere and demand for better mobile experiences will only increase. As technology improves and the need for more robust tools is recognized, it’s our belief that testing mobile devices will only get easier.

Author’s Note: The information contained in this article reflects the state of the tools as reviewed when this article was written. Since that time, the technologies presented have evolved, and will likely continue to do so.

Of particular note, one of the tools discussed, Zoom, has added new mirroring capabilities for Android devices. Although a Zoom app for Android was available when we reviewed the tools in early 2016, screen mirroring from Android devices was not supported. Therefore, this functionality is not reflected in its ratings.

We urge readers to be conscious of the rapidly changing state of modern technologies, and to be aware of the potential for new developments in all of the tools discussed.

A Brief History of Usability by Jeff Sauro, MeasuringU, February 11, 2013

Presentations by the authors

UXPA 2016 presentation: Tips and Tools for Testing Mobile Interactions Remotely (and On a Budget!)
Presentation on Slideshare